Food for Thought: The Indian Male Gaze and White Woman 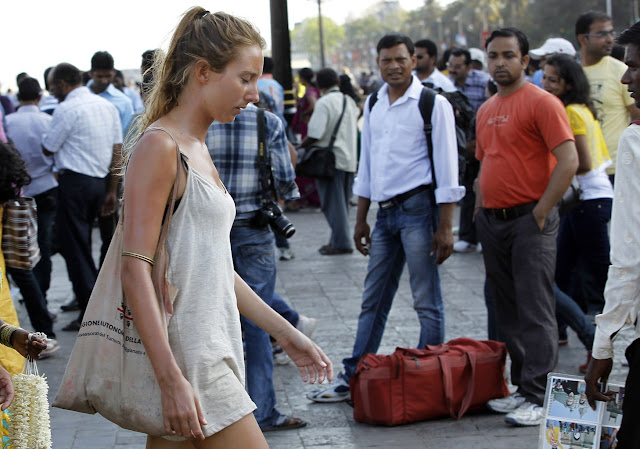 This photo is a perfect food for thought!

The photo (part of an AP news on rape in India) presents in real-life-situation the psycho-socio-politics of look and gaze and the operationalization of violence and power through male gaze.

The way the photo has pictured one of the 'normal' events (of look and gaze) in South Asian society tells heaps. The photo is intentionally trying to foreground the "gaze" of the typical Indian men (see pic: there are three Indians gazing at the white woman) upon a White woman tourist in a busy tourist hotspot of India (New Delhi Gate).

This exposes the reality of India -- the male stare or gaze -- which most Western tourists either hate or feel weird about. However, among men in India, this norm of gazing at woman has been internalized so deeply that neither the "gazers" nor the locals around them notice what's wrong or weird about it.

In the picture, there are at least three male gaze captured: 1) the man in blue T-shirt standing beside his red luggage is staring at the bare thighs of the white woman who, obviously, is not "looking back" at the gazers. 2) the man in white shirt is also engaging in a curious and voyeuristic male gaze upon the white female. 3) there is a third man with the same gaze on the right hand side and he is only half in the frame. There could be others doing the same thing at the same time making the white woman feel uncomfortable.

The effect of voyeuristic gaze of multiple men is discernible on the woman. She is looking straight down and seems to have been trying to ignore what's happening to her in the busy marketplace.

Picture this incident in Sydney, for example. What is likely to happen? This will not happen in the first place because the norm is that you should not stare or make eye contact with a stranger in a way that could potentially create uncomfortable situation. If there is an eye contact, that has to be for the purpose of some kind of communication. It could be even a simple communication of greetings like 'hello'. If it happens, the one who is being looked or gazed upon would respond in whatever way the situation would demand. The person subjected to a gaze or stare is not likely to just ignore the gaze. But in places like India were voyeuristic gaze are so pervasive and are like a norm among males, responding to them seems either trouble making or meaningless.

I think, it could be a matter of lengthy scholarly research as to how the differences in so called norms lead to conflict and violence. The act of look and gaze could be one case to look at. This much for now, just a food for though. One more pic of gaze: 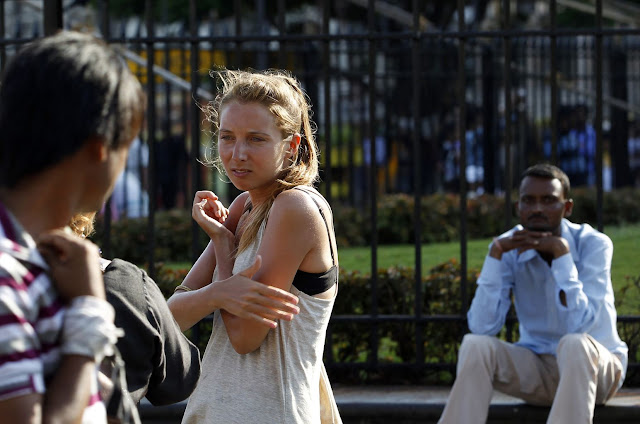 (Photo source: AP. Photo Caption reads: In this Tuesday, April 2, 2013 photo, German tourist Carolina De Paola, 22, walks near the landmark Gateway of India in Mumbai, India. A fatal gang rape in New Delhi didn't deter Germans De Paolo and Canan Wahner from traveling to India for a six-week tour. On a train, a man grabbed De Paolo's breasts from behind but she never reported the crime, deciding there would be no point. Violence against women, and the huge publicity generated by recent attacks here, is threatening India's $17.7 billion tourism industry with a new study showing tourism has plunged. (AP Photo/Rajanish Kakade)
Top photo source: AP

About Look and Gaze